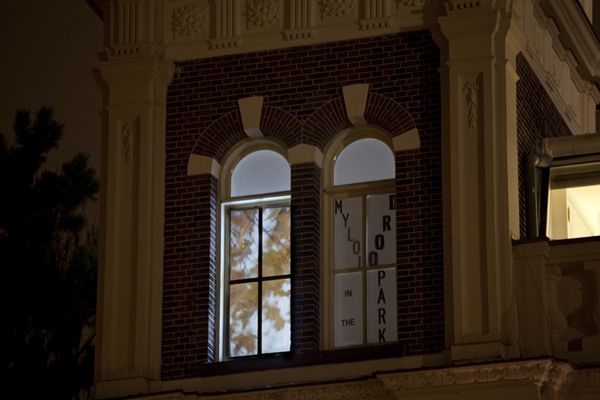 I did my first residency ever for Dutch radiostation Radio 4. One of their features is a five day residency called ‘De Torenkamer’ (‘The Tower Room’) at their office in the former Filmmuseum at the Vondelpark. I spend five days investigating the concept of ‘park’, took a walk every day with a friend or acquaintance through the park and also picked up a project I did last year which involves trees. It was very much a research based residency, although the producers of the shows kept stressing the fact I needed to show a result after five days. I guess that’s nice for their listeners, because talking about what you”re discovering and experiencing is something there”s seemingly no time for on air. So I saw the whole residency as a time in which I could be an artist for five days without the daily drama of life and trying shit out. To attract not only listeners in my journey I also wanted to show whatever it was that I was doing. I made a video installation that featured the trees I was visually engaging with, and beamed them on the windows of my tower room, for any passenger of the park to see. I also wrote a daily blog for the website of the radio. I think I was seriously flirting with the idea of being a writer of columns and felt like I finally had an audience so I completely went for it.